Dear Friends,
I’m excited to share this update with you. On August 13, I was able to return to Haiti via MFI I to finally see our people and get back to work.  I spent several days navigating Port au Prince attempting to purchase supplies and loading up for the grand cross country trek to Bombard. 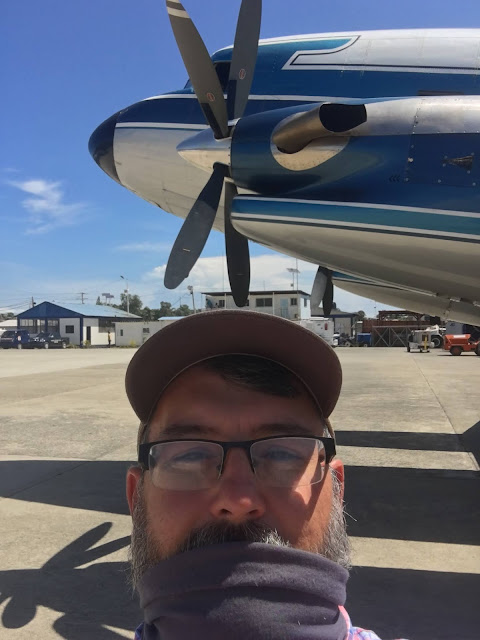 I was blessed to spend 3 nights in Montrouis at the beach property. While in Montrouis, I met with everyone who worked with our family on that project, helped with some maintenance issues, and prepped the box truck of donated hospital supplies from Chadasha and St. Mary’s Hospital. We installed new aggressive tires on the box truck more suited for the off-road driving we do in Haiti. 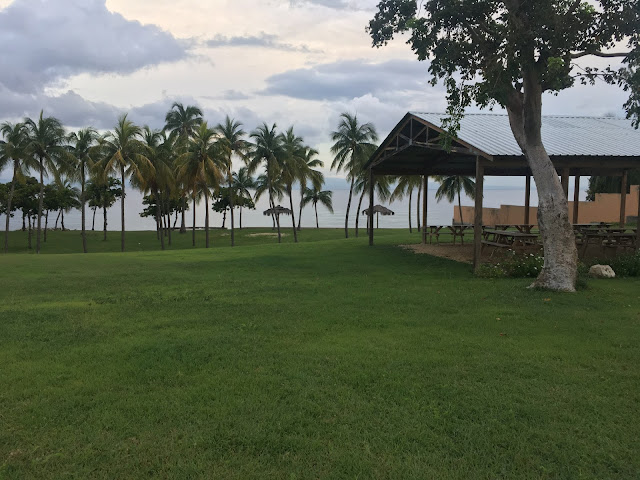 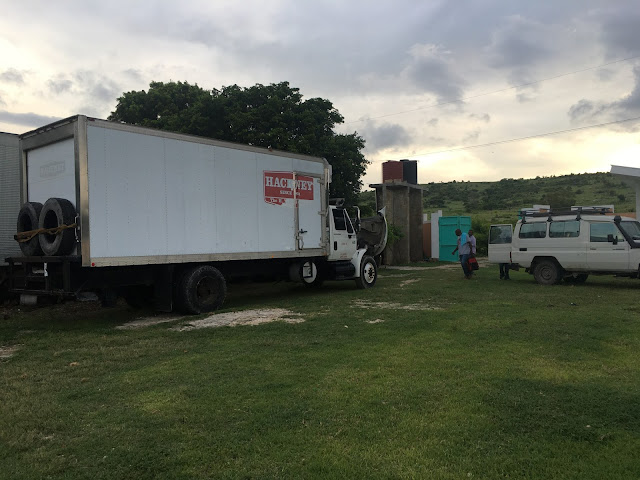 Sunday, Aug 23 with trepidation, we loaded up and headed north with the Landcruiser and the new box truck. For several weeks, the last part of paved road from St Marc to Gonaives had been a battlefield for the gangs. We were all a bit nervous about passing through this zone, so we waited until mid-morning to attempt a quick pass.  Thankfully, we made it through the zone with little problems and only rattled nerves. 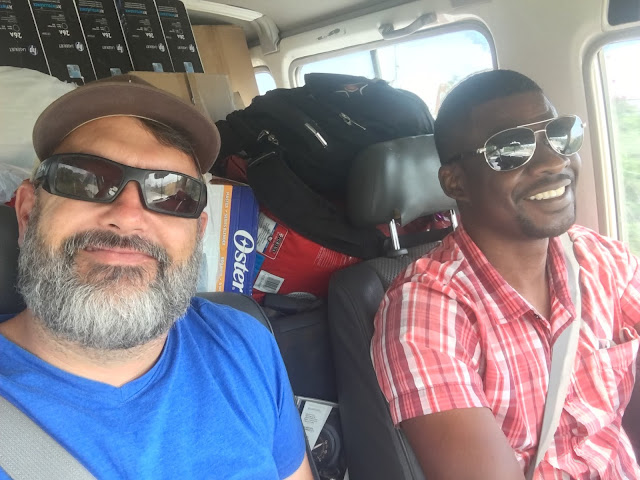 In Gonaives, I visited with Mano (my right hand man on the compound) who had traveled to town to meet with an orthopedist. For several weeks he had been bed ridden with severe pain in his left knee, unable to walk or stand.  Thankfully, I was able toget him an appointment and x-rays where it was discovered the ….. bone in his was displaced, probably from a tumble off of a motocycle. 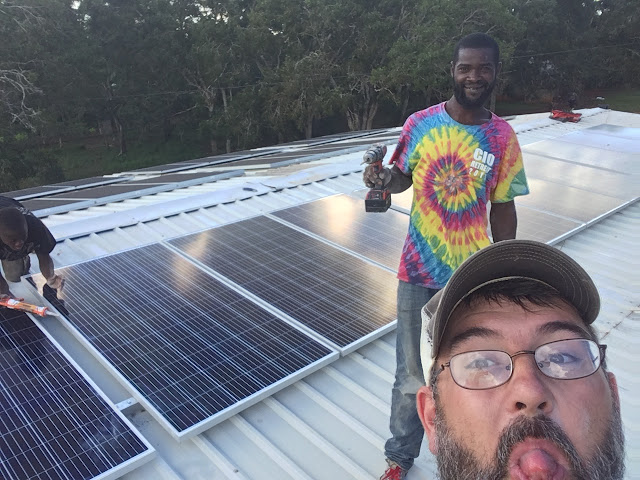 We were encouraged to hear that physical therapy and a Cortisone injection was all he needed. He has gotten progressively better as the days have passed. We are thankful that medicine prevailed and that the witch doctor wasn't able to “cure” him of his ailments. This incident was a wonderful opportunity for Daniel and I to pray with him and continue to share the gospel with him. Pray that Mono will find Jesus and put his trust in Him and not the cultural norm which relies on the local witch doctor.
After Gonaives, we began the 6-8 hour offroad trip to Bombard. Along the way, we passed several un-manned road blocks that have been popping up by rival political factions. 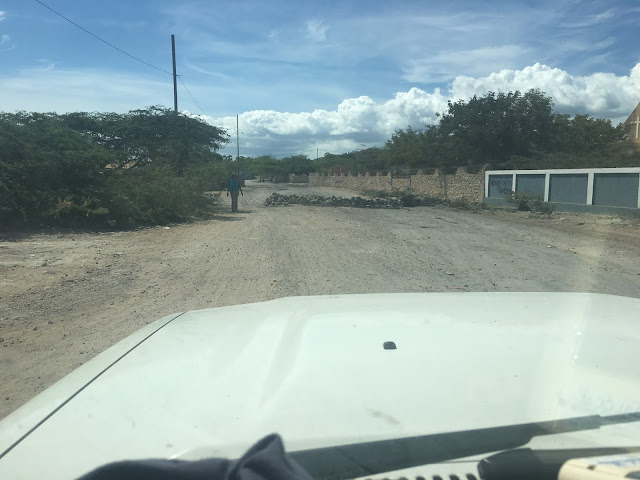 I approached a road block where we were attacked by a viscous gang from Port au Prince. They beat the vehicle, stacked tires around it and poured fuel on them to burn the car with Freddo, Dieunelle, and myself in it. I attempted everything within my power to de-escalate the situation, even offering to get out of the vehicle, sip their homemade alcohol and play dominos with their leader, a grey old man in US army fatigues whom they obeyed with fervor. I was willing to do anything to de-escalate the situation and allow our convoy to pass. I offered money, I offered the vehicles, the truck, nothing seemed to be of interest to them. It was me they wanted as there is a growing hostility towards foreigners, especially Americans, because of our now public interventions in Haitian politics and now Covid (which was brought to Haiti by a European).
Playing nice and attempting to calm everyone down wasn’t working. They claimed they wanted to slaughter me and post a video online so that the world could see they were as savage as the Somali. Something in me rose up and I became furious and spitting with anger as I began to yell at them. DO WHAT YOU WANT, I AM NOT SCARED OF YOU, I KNOW WHERE I’M GOING, MY GOD IS WATING ON ME WITH ARMS OPEN WIDE!  I  then reminded them of the “savage” haitiains they wanted the world to see. I also indicated that if I was harmed, there would be 50k people in the northwest who would be angry- that my friends from Cite-soleil all the way to Bombard would want retribution for my killing. Suddenly, Son Son, (their leader) stepped back and began to reconsider. Within a few minutes of negotiating with fellow gang members, he told them to remove the tires and let us pass. The hour and 20 minute long ordeal was over. God had delivered us, and it wasn’t my time to go.
We continued our drive, nerves rattled and quite delayed. The truck climbed Mont Shen without problems and our cargo arrived safely. This whole ordeal was quite strange.As I said earlier,  the bandits never seemed interested in the vehicles, they never really asked for money, they never seemed interested in the contents of our vehicles.  My nerves were rattled and the question of how to proceed began flooding my mind. With so many challenges and tasks before us, I put the trauma aside and began to tackle issues at the mission.
Upon arrival I found  many improvements led by Russ and Karen in my absence. Not only had they kept the place running, they found time to improve the facility, began the construction on the airplane hangar, and kept the staff working. I am forever in their debt, as I know none of this would have been possible without their presence. I’m thankful they heard God whisper years ago to come and help us in Bombard. 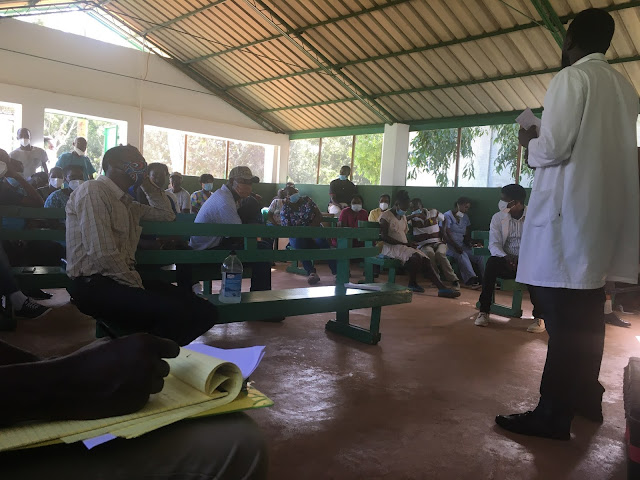 I spent the the remainder of the week meeting with staff, working on strategic plans with the hospital administration, and tackling minor projects around the house.  The purpose of my visit had been to prepare our home for Sarah and the kids arrival in the coming weeks and also for us to get back in our routine.  Unfortunately, my incident, along with that of many other foreign missionaries throughout Haiti in this turbulent time has us yet again changing our plans. Sarah and the kids will not be able to return to Haiti this year. I plan to travel back and forth and continue to manage the mission from a distance. Unfortunately, Haiti has slipped back into a violent and foreigner intolerant disposition. Our love for Haiti hasn’t changed, nor are we questioning our calling.  We simply must be wise with our actions and diligent with our security moving forward. I will continue to work on my pilot training as I don’t forsee I will be traveling the road again.
The remainder of the week I did my best to stay focused and not worry. Sleep didn’t come often and I had very little appetite. I’ve been told this is common for victims of traumatic events. I decided to leave early, and  I cut my trip short before Hurricane Laura arrived and prevented me from leaving. I’m forever grateful to Eric Fagerland, who dropped his  schedules and came to pick me up. I’m thankful I was able to get on the last flight out before the storm arrived. It was great fun to surprise Sarah in the middle of the night, as she hadn’t even been expecting me! The kids were pretty surprised to find me in the bus the next morning when they woke! 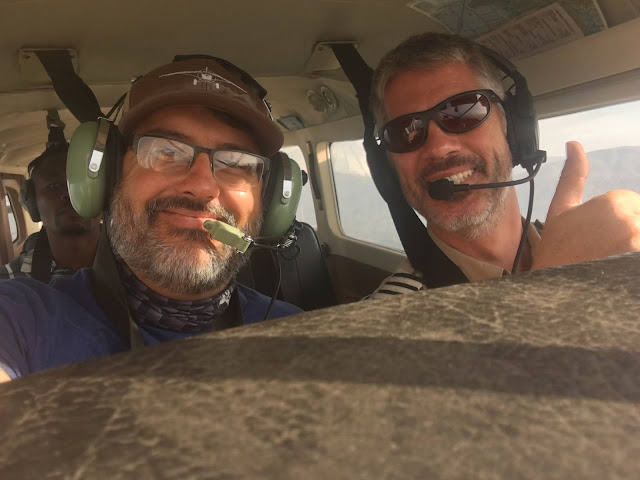 The mission survived the hurricane well. We lost a few trees that fell on our fence and the power line powering the widows home. Our guys worked quickly to restore power and repair the wall.  Thank you for your prayers as we weathered this storm and those to come, both physically and metaphorically. 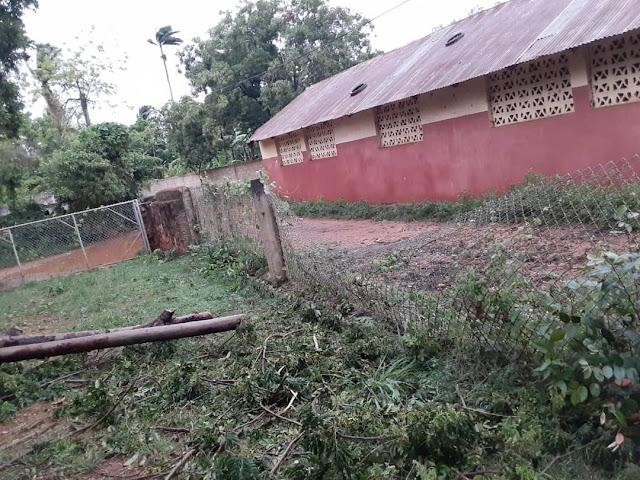 All this being said, we have a need. Our family has been traveling and living in a converted school bus since May as we were planning to return to Haiti at any moment. Obviously, this plan has changed and we are in need of approx $1k per month in additional support in order to secure permanent housing in the states. The bus has been fun, but unfortunately, it is not a long term solution, especially with the arrival of cooler weather.  We would love to meet with anyone whom you think would be interested in supporting our work (either in person, or virtually!) 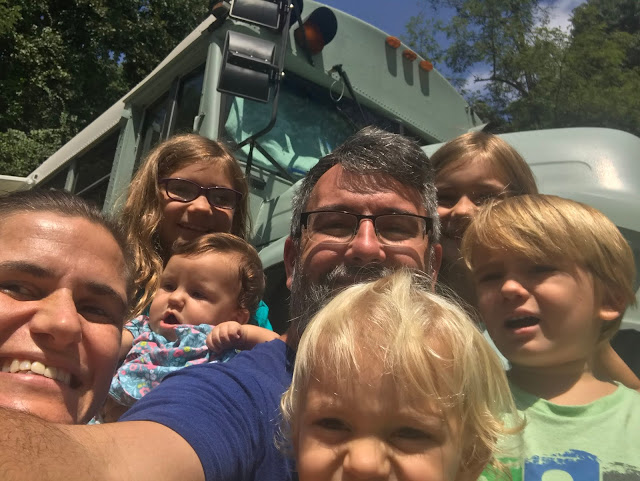 Thank you for your love and support.  We literally could not do what we do without you!
Posted by Matt

Dear Friends and loyal supporters,
We wish you an early 4th of July Holiday greeting. We are eager to write and share with you the good news of our efforts in Bombardopolis. This past week we were able to host a surgical team from the World Cataract Foundation. The team had 2 surgeons, (Dr. Van Dyck and Dr. Sterling) who were able to operate on a total of 54 patients, and screen 632 for eye problems. Most of the patients were older folks who were nearly blind.

This is Mr. Pierre, he traveled 3 hours by moto to have his surgery.  He was thrilled when his bandages were removed and he was able to see his 6 year old grandson for the very first time.

This is Marioland, she is one of the widows who lives under our care in the widows home. Previously blind in both eyes, now she can see well!  Until now, she was unable to dress herself or make her own way to the restroom.  Now she proudly does both on her own, only a few days post-surgery!

Mr. Joseph was working alongside a missionary 4 hours from us, the missionary saw a live video of the surgeries happening at the hospital and sent him to us. Eager for a chance to restore his vision, Mr Joseph arrived the following day and was operated on. His vision was restored, and his life forever changed, all because of a video streamed live on Facebook!

We tentatively hope to host the team again in January, with a goal to operate on more patients. We are encouraged by their good work and the life changing procedures World Cataract Foundation has provided to the people of the Northwest.

Pray with us for water, we are very, very excited to host Global Outreach’s well drilling team in Bombard the first 2 weeks of July.  We are desperate to increase the quantity of water we can pump at the mission. We have raised the funds to begin drilling, now we fervently seek your prayer that God will provide clean and abundant water in the new wells.  Currently, our 2 small wells produce approximately 1000 gallons per day, far short of the needs of the mission and the community of 100+ families who rely on our water sources daily for clean safe drinking water.