Am I who I really think that I am?

Over the past few weeks, I have struggled with this idea. For most of my life I have thought of myself as a generous and loving person. I‘ve considered myself a thrill seeker and an adventurer.  This weekend it hit home, am I who I really think I am?

This past weekend I had the opportunity to celebrate my new-found unemployment with my good friend Geoff and a road trip. We drove 21 hours in a 60 hour weekend to ride our bikes at Ray’s Indoor Mountain Bike Park in Cleveland, OH. It is a cool place with tons of fun things to do.


For a while, I have considered myself a pretty good rider, I have tried just about every style of biking and recently gotten into dirt jumping.  At Ray’s I saw lots of “older guys” riding and thought to myself, “What is that guy doing here? He’s not nearly as cool as he thinks he is.”  Then it hit me. Or my face hit it, I should say...

I rocked my face on a jump I had ridden several times, except this time I tried to go bigger than I ever had before. It didn’t work out so well. I broke my glasses, cut my face, and busted my nose and lips.  It hurt, and I was a little shaken up. However, my pride hurt even more. I began to realize that I was one of those “old guys”  I had been making fun of moments earlier . One of those “older guys” who wasn’t nearly as good a rider as I believed I was.

Since the face smashing, I began to reflect on the question. I mentioned earlier that I have always considered myself generous and loving.  But, when I look back at my record was I really generous?  Loving towards people?  At this point, I have to say no. I am not nearly as loving and generous, or adventurous as I considered myself to be.

I want to change that. I want to live out the life that I have lived in my head.  I want to make changes in the way I treat people, how I give to others, and not think so highly of myself.  I want to challenge those around me to examine their lives and consider the evidence.  Are you living the life you really think you are?

Lastly, everybody loves a cute baby picture. We put up our Christmas Tree and Willow is infatuated with it. 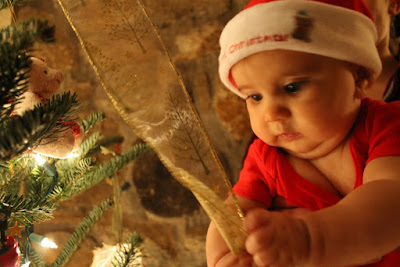